By Shane Zurilgen of Flyaway Farms 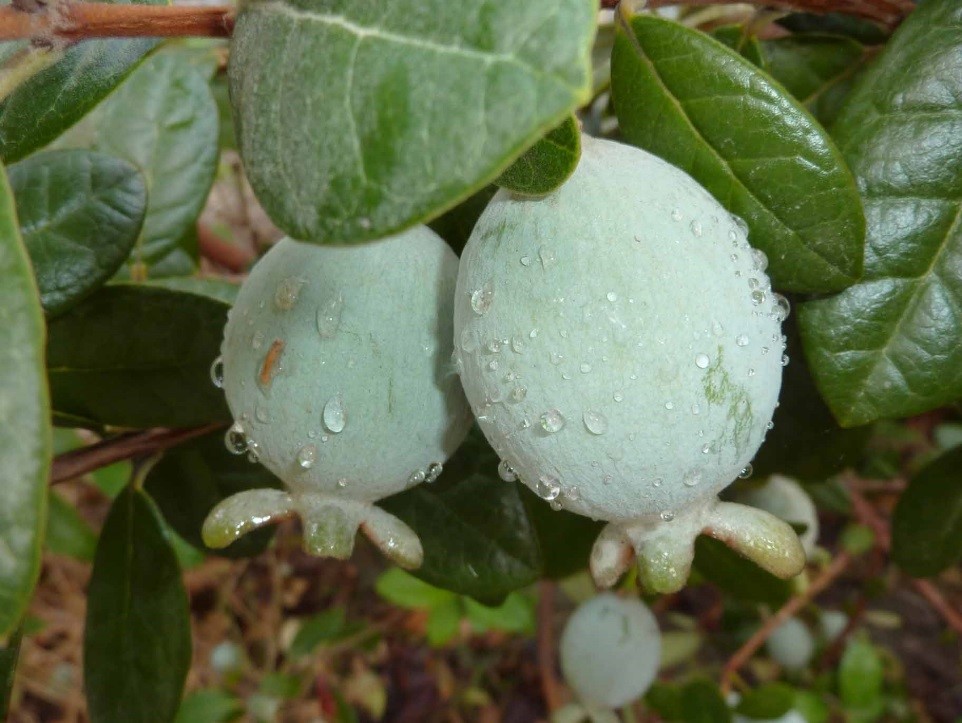 The first time I tasted a pineapple guava I was blown away. Its flavor was totally unexpected. I had been growing them in my back yard purely as an ornament. They grow on a handsome evergreen shrub which has beautiful red and white flowers in the summer. I knew the shrub was supposed to produce fruit and had heard that it was “edible” but hadn’t yet seen any. Lots of plants are edible to the likes of Bear Grylls, but most people would not want to eat them except for in some kind of post-apocalyptic scenario. I myself have eaten pine needle tea but it isn’t going to happen again unless I am lost in the woods in desperate need of a vitamin C boost.

The scientific name for the pineapple guava is Feijoa sellowiana.  After a few years of growing my Feijoa plants I finally found them producing fruit around Halloween. I quickly went to the Google for information on how to tell if the small, green, egg-shaped fruit was ripe. It turned out they are ready to go when the fruit falls off the plant by itself or from a light touch. The next day I picked a couple freshly fallen fruits off the ground and gave them a taste.

It should be said that I have a terrible palate for taste. I attribute this to years of addiction to very spicy foods. I think that over time I just nuked my taste buds. I stopped going to wine tastings because I could never pick up any of the odd flavor notes that were supposed to be emanating from the particular vintage I was swilling. Nevertheless, the pineapple guava was a revelation. It tasted at once tropical and citrus-like with something like strawberry thrown in for good measure. I quickly consumed all of the fruit that was ripe.

Those plants became my first destination every morning until the fruit was gone.  I have never found pineapple guava in a store. I have heard that some folks have found them at farmers’ markets on occasion, but I certainly haven’t. When my subsequent research yielded no commercial producers for this specialty crop in California I knew I had to give it a try. When I bring it up to people who have actually tasted a pineapple guava before they get very excited. It has been suggested to me that it would add amazing flavor to a kombucha or mead blend.

In addition to its unique flavor, Feijoa is drought tolerant and virtually disease and pest free. At Flyway Farm in Davis I have decided to put in about 40 plants in two hedgerows and put it to the test.  I am prepping the ground and setting up irrigation while I seek out a source for some of the more productive varieties. I plan to get them in the ground this fall so that you too can soon share the unique experience that is pineapple guava.

4 thoughts on “Introducing the Pineapple Guava”