Overview: The primary goal of this project is to develop best management practices that allow California almond growers with micro-irrigation, to effectively leach salts while minimizing nitrate losses below the root zone.

Issue: Almonds have a relatively low tolerance to soil salinity, and over time salt buildup in the rootzone can lead to lower orchard production. Soil salinity increases can be attributed to a combination of low rainfall, high evapotranspiration and increasing salt concentration in irrigation water. Also, switching from flood to micro-irrigation systems can lead to an increase in salt concentration in the root zone. 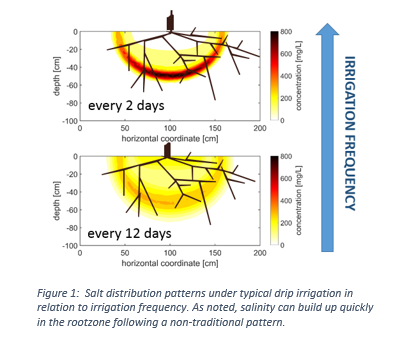 Greenhouse Experiment: Almond saplings were grown under heterogeneous conditions to measure nitrate and water uptake. The saplings’ roots were physically split, allowing for different treatments to be applied to each half of the root mass. Plants were grown in both soil culture and nutrient solution. Treatments were as follows: 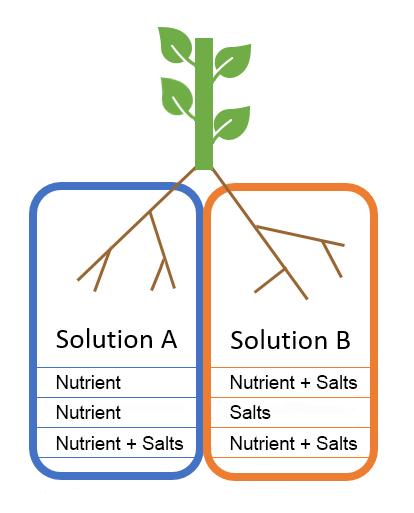 Preliminary Results: The graphs below show water consumption from each side of the divided root mass. Results suggest that almond roots can nearly shut-down water consumption from the saline root half, when a non-saline zone is present. However, when the tree has no other option, it will obtain nutrients from the saline solution. Data also suggest that the presence of nutrients increases water uptake.

Nitrate uptake followed a similar pattern to water uptake. Nitrate uptake was significantly higher on nutrient only sides when compared to nutrient + salt solutions. In the salt only treatment, there was no nitrate uptake, suggesting that, in the presence of saline conditions, nutrient uptake is limited.

Data from the greenhouse experiments will be used to calibrate a HYDRUS soil and water model. 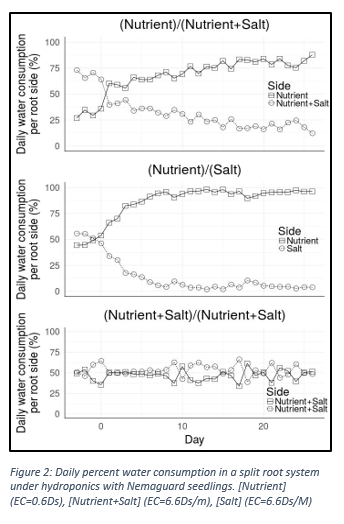 Nitrate uptake/depletion, water use and salinity will be monitored using a variety of probes as shown in the figure below.

Impact: This project has the potential to provide growers with the tools that they need to improve nitrate and salinity management in California almonds, especially where irrigation water is relatively saline, water supply is limited, and/or during drought years where rainfall was not adequate for salt leaching.