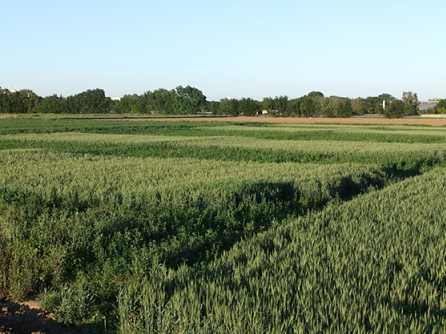 In Davis, strips of alfalfa and wheat-sudangrass rotations were established to compare the effects on a wheat crop planted after both systems. Yields of wheat at different N rates were then compared.

Issue: Alfalfa is a leguminous crop that converts atmospheric nitrogen (N) into organic compounds. While it is well-known that crops following alfalfa benefit from the residual N produced by alfalfa, the amount of residual N has rarely been measured. Previous estimates of N carryover from alfalfa range from 40 to 80 lb. of N per acre. This project is aimed at characterizing the residual N available for crops rotated after alfalfa.

Methods/Locations: Field-scale experiments were established at Davis, Tulelake, and Kearney, CA, and the effects of various rotations on N accumulation in wheat were examined.

Main findings: The investigators found that wheat following alfalfa realized N credits of 70 to 130 lb. of N per acre, depending on location, soil type and other factors. This is a significantly larger credit than has been previously estimated.

The researchers suggest that these amounts should be adjusted based upon other parameters that may influence N availability. These may include: whether the stand was adequate, whether foliage was vigorously growing when plowed down, plants per square foot, the degree of weed intrusion, soil-type, etc. Additionally, the time elapsing between plow-down and wheat planting must also be considered, since some of this N may be lost during crop rotation.

Crop rotation with alfalfa caused improvements in wheat protein at virtually all N rates applied to the subsequent wheat. This is important since much of the N applied to wheat has the objective to improve wheat protein, which brings a premium to the grower.

Potential Impact: Typically a minimum of 150,000 acres of alfalfa are rotated to other crops each year in California. If a conservative estimate of 80 lb. of N per acre credit is accounted for in the crops following alfalfa across the state, 2 million pounds of N fertilizer could be conserved each year. This would reduce production and labor costs incurred by growers and benefit the environment.